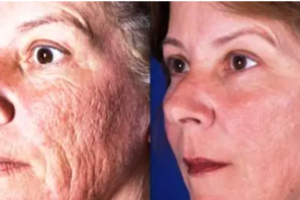 All patients who received between 5 and 6 treatments in the 100% TCA group had excellent results. Furthermore, both 100% TCA and 65% of TCA groups recorded good satisfaction rates. A significant complication was non-existent.

As a superficial peel, or as part of a combination peel series, for acne scars of medium depth, TRICHLOROACETIC ACID (TCA) is particularly safe, and in fact, has a very long history of rendering clinical and histologic improvement to the skin effectively. The collagen found in the upper reticular dermis and papillary are able to undergo necrosis with the application of TCA to the skin, as well as coagulative necrosis of the epidermis cells due to the precipitation of proteins that it causes. In a span of several days, sloughing of the necrotic layers occurs, while the adnexal structures that the chemical damage had spared allows the skin to reepithelialize. For several months, dermal collagen remodeling brought on by the chemical peel will continue. Investigators have found that both an increase in dermal volume resulting from an increase in elastin, glycosaminoglycan, and collagen content and the reorganization in the structural elements at the dermal level have caused TCA’s clinical effects.

Scarring causes the reticular dermis to heal, as recent studies have shown. There is a suggestion that using higher TCA concentrations for peeling is very risky and definitely discouraged, among the increased risks that they deem associated with deeper peels using TCA. Furthermore, data on the effect of high TCA concentrations for Koreans (type IV-VI) who are known to develop hyperpigmentation on the skin in a post-inflammatory sense, and patients with dark complexions are very limited.

We have suggested pressing hard using a sharp, wooden applicator on the depressed area around atrophic acne scars in the focal application of TCA in higher concentrations in order to overcome hyperpigmentation, hypopigmentation, scarring and other such complications, as well as to maximize the effects of TCA. Each acne scar eventually produces numerous frosted white spots. The authors have named this technique CROSS, or chemical reconstruction of skin scars. However, the technique is still restricted in usage because it has not been patented. Using either 100% or 65% TCA, the CROSS method is able to reconstruct acne scars by maximizing dermal thickening and the production of collagen that increase with high concentrations of TCA. Because it spares adnexal structures and the normal tissue adjacent, there is a lower complication rate and healing is a lot more rapid, compared to medium to deep chemical resurfacing. This technique is used on focal chemical scar reconstruction but does not involve classic chemical resurfacing. For the past 10 years, we’ve been able to successfully treat dilated pores and facial acne scars using this technique. This study is conducted for the purpose of evaluating how the CROSS method affects dark-complexioned patients with atrophic acne scars in a clinical sense.

Based on the 65 patients who were treated of their atrophic acne scars using the CROSS technique between July 1996 and July 2001 in our hospitals, an analysis was conducted. Pressing hard on the depressed area where atrophic acne scars occur with a sharpened applicator made of wood during the focal application of higher concentrations of TCA is what the CROSS method entails. A local pharmacy made the unbuffered TCA in both 65% and 100% weight/volume on order.

The age range of the patients was from 25 to 45 years old, with the mean being 32.5 years of age. Of the patients, 10 were men and 55 were women. All the respondents had a specific skin type: Fitzpatrick IV-V. 100% TCA CROSS was used to treat 32 patients, while the other 33 were administered with 65% TCA CROSS.

Two blinded physicians evaluated the photographs taken before the treatment and 6 months after the treatment for independent clinical assessment. These physicians used the following improvement categories: Excellent (improvement of over 70%), Good (improvement between 50% and 70%), Fair (improvement between 30% and 50%), Poor (less than 30% improvement). Six months after the final treatment, the patients were interviewed to record their satisfaction rates. Complications such as scarring, herpes simplex, keloids, hypopigmentation, hyperpigmentation, persistent erythema, and flare-up were also evaluated by the physicians.

Prior to the treatment, patients were evaluated thoroughly on important factors such as active acne lesions and current and past medications. Histories of prior keloids, herpex simplex infections, hypertrophic scarring, or allergies were also gathered. To prevent the risk of excessive and unpredictable TCA penetration, pre-treatment medication like tretinoin cream wasn’t applied prior to CROSS.

The CROSS technique does not require sedation or local anesthetics. During the procedure, patients were relatively comfortable. Alcohol was used to subsequently cleanse the skin after facial washing using soap. After which, pressing hard using a sharpened, wooden application, the 100% or 65% TCA was applied focally on the atrophic acne scars’ depressed area. After a single application, the skin was carefully monitored until a “frosted” appearance is attained. This frosted appearance is vital in monitoring the depth of the peel, and is produced when the dermal and epidermal proteins coagulate. Each acne scar produced frosted spots within 10 seconds in the focal application of TCA. For a moisturizing effect, an ointment-based antibiotic was applied after CROSS, instead of an occlusive dressing. However, with crust formation, this was discontinued to avoid detaching the crust. After CROSS, anti-viral medications and antibiotics were not needed as oral prophylaxis. A week or two after CROSS, some patients used a moisturizer sunscreen that consisted of 5% hydroquinone and 0.05% tretinoin with a hydro base for at least 4 weeks. After CROSS, makeup was also allowed. To avoid collagen production and dermal thickening, CROSS was performed repeated every 1 to 3 months.

As shown in Table 1 of the patient treatment data, 95% (30 out of 32 patients) of the 100% TCA group and 82% (27 out of 33 patients) from the 65% TCA group responded well to the treatment clinically. All of the 15 patients from the 65% TCA group showed excellent results after receiving more than six courses of the treatment, as opposed to 40% (2 out of 5) of the patients who were treated only three times, as illustrated in Figure 3 and Table 1. In Table 1 and Figure 4, it is important to take note that all of the patients who received 5 or six courses of 100% TCA treatment exhibited excellent results. Based on the data found in Table 1, we can already conclude that 100% TCA CROSS exhibited better clinical effects compared to 65% TCA CROSS.

Scarring, hypopigmentation, permanent hyperpigmentation, keloids, persistent erythema, herpes simplex flare-ups, and other complications were not apparent at the treatment sites in any of the cases. The frequency of the complications did not increase with 100% TCA CROSS, comparative to the 65% TCA CROSS treatment. The only occurences were post-inflammatory hyperpigmentation, which only lasted for 6 weeks, and mild erythema, which faded between 2 and 8 weeks. Four patients experienced mild pustular eruptions, but after using cefadroxil 500 mg thrice a day, these were cleared up within a week. Two patients showed good results without scarring excessively, even if they received isotretinoin for 3 months prior to the treatment. However, it should be noted that chemical resurfacing is not normally recommended for patients who have taken isotretinoin within 6 months prior to the treatment because hypertrophic scarring will likely occur.

Results indicate that there were no considerable complications from higher frequency of the CROSS treatment on acne scars and that the therapeutic effect was significantly improved. Moreover, atrophic acne scars benefited more from the application of a higher concentration of TCA as this was more effective.

While the pilosebaceous unit suffers from the chronic inflammatory disease known as acne, commonly during adolescence, recent studies on women between 25 and 44 years of age show that clinical acne does not actually decrease in prevalence with age. And because the duration of acne is directly related to the formation of acne scars, the formation of which are actually more common in this age group. Though only 22% of patients experience significant scarring, 95% will suffer from minor acne scarring.

Icepick, boxcar, and rolling are the three recent classifications of acne scars. To improve and even reconstruct the occurrence of acne scars, there are various treatments that can be used, such as punch elevation, chemical skin resurfacing, subcision or subcutaneous incision, laser skin resurfacing, and punch excision. Acne scars can be improved even more dramatically by using a combination of these treatments. However, only N-VJ skin types use procedures that incorporate chemical skin resurfacing. But for the reconstruction and improvement of acne scars, there is still no known single treatment modality so far.

The CROSS method, performed by using a sharpened wooden applicator to apply higher concentrations of TCA up to 100% focally on the depressed area of atrophic acne scars, is suggested. This technique focuses on the collagen production and dermal thickening, which increase with high concentrations of TCA, so using 100% or 65% TCA alone gives it a great advantage. Most notably, this technique can be used on reconstructing chemical scars focally, instead of being an equivalent to the more traditional full-face chemical resurfacing. Furthermore, this technique spares the adnexal structures and spares the normal skin adjacent to the treatment area, so the risk of hypopigmentation and scarring is greatly reduced and even avoided altogether. Compared to 65% TCA, it has been found that the application of 100% TCA is a lot more effective with the CROSS method.

Repeated CROSS applications of 100% TCA have been found to normalize deep icepick scars, as well as boxcar and rolling scars. Repeated CROSS treatment is indeed effective for treating deep acne scars because clinical improvement is directly proportional to its frequency. Moreover, before performing full-face resurfacing treatments for areas that have been deeply pitted, this can also be used for autologous soft tissue augmentation. Dilated pores have also been successfully treated using this technique. Even deep surgical scars can be reconstructed using the CROSS method, as we’ve found out recently.

Significant complications such as hypopigmentation, permanent hyperpigmentation, keloids, persistent erythema, and keloids were not developed by any of the patients. Compared to the use of 65% TCA CROSS, there was no increase in the frequency of complications with 100% TCA CROSS. Oral antibiotics were able to clear focal skin infections, while transient post-inflammatory hyperpigmentation and mild erythema cases faded between 1 and 2 months. Among the nine patients who had a history of herpes without oral antiviral prophylaxis, no herpes simplex flare-up occurred.

Because the risk of developing hypertrophic scars is increased with medium to deep chemical resurfacing, isotretinoin and other drugs that depress adnexal glands are not generally recommended. CROSS generally spares the adjacent normal skin, so a history of isotretinoin use is not a relative contraindication and does not influence the results clinically. To determine the full effects of isotretinoin in CROSS, however, further study is still required.

In conclusion of this study, CROSS is indeed a safe and effective way to treat atrophic acne scars with minimal complications. The number of CROSS treatments performed was directly proportional to the degree of clinical improvement observed, with 90% of the cases showing good improvement after three to six courses. Of the 100% TCA group, 94% of the patients were satisfied with the CROSS method, compared to 82% of the 65% TCA group. Moreover, atrophic acne scars were treated more effectively using 100% TCA CROSS, as opposed to 65% TCA.

This novel technique is yet mainstream in North America. Because this procedure is so simple, it is not only easier for the clinician to perform but is also more patient-friendly than more conventional methods such as CO2 laser resurfacing or dermabrasion. Compared to nonablative laser treatments of scars, this method also requires less equipment. We urge others to give this technique a try to expand our literature with more experience.